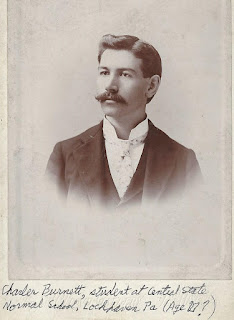 Uncle Toby says: I would not bet the farm on the dates (1893 and 1907) being correct....I put little trust in the dates, as I doubt he was a student at Central State Normal School when the second of these photos was taken. 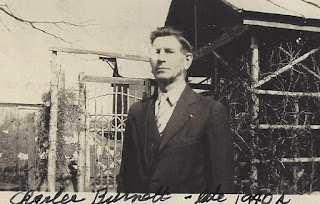 Uncle Toby says: "I think the barn in the background is the barn of the Buckton property, but I do not remember the decorative gate." 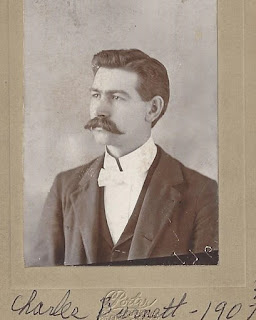 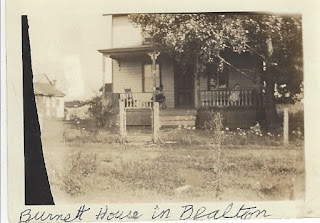 Burnett house in Bealton, Va before return to Pa.


Having seen so many photos of my grandfather Burnett, I would like to add a few more words about him. I knew him as kindly and caring. He taught me to milk a cow, a skill that my namesake, great-grandfather Toby Speicher never mastered. (How many other Americans would be able to milk a cow? Damn’ few nuclear engineers, I’ll wager.) He also showed me how to care for cattle, including things that are not good to describe before eating.

He was a man of learning and many talents. The stonework he did on the exterior and interior of the Burnett house in Buckton is excellent. He was also well-read, including scientific matters. He explained to me (based on his own thoughts) why the earth’s rotation and polar climates caused winds and weather to come from the west.

But he was not a businessman. Many stories I have heard of his desiring to benefit others by giving away assets; or by making a bad business deal, such as selling cattle to a neighbor when the family moved from Bealton. He let the neighbor take the cattle without paying, and the neighbor never came up with the money.

I hope my John Burnett cousins can come up with more stories of Grandpa Burnett.

Posted by Meredith Garmon at 18:16